Hi guys! We're back with the Alive family. This will be update three for SimNo. Let's jump into the story.
I sent Koios off to the telescope again to fulfill that cute wish he had to name Nuala after a star.

After a while, he saw a meteor fall? I sent him after it and he collected a bit of money. Not really worth the effort, but meh.

Yeah so Dia can't do opportunities that come up for her job...at all. She just gets stuck at the police station and ErrorTrap ends up resetting her again and again. That's always a great sign.

Look at this cute little fella! Paris made him. Speaking of Paris, I have chained him to the workbench. 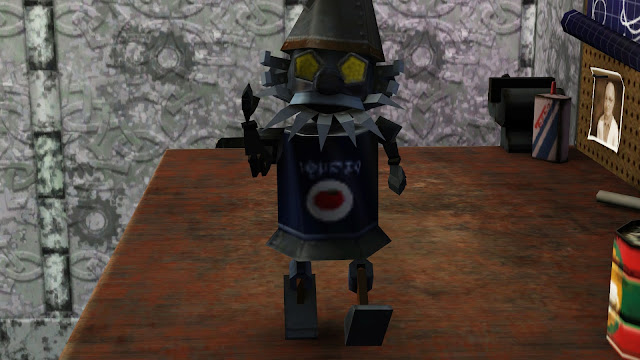 "Writer can I please come out of this room now?"
No. 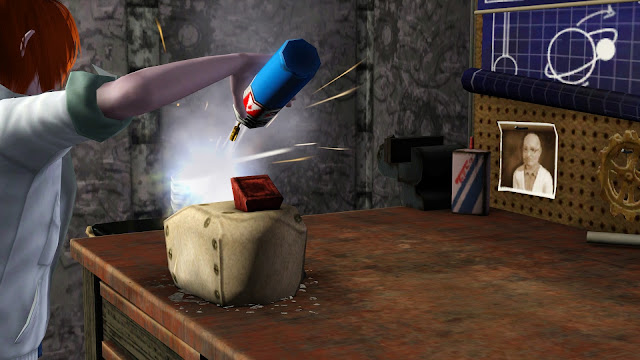 A stray came up to the house and I had Ersa try to befriend it. It was super cute and I planned on adding it to the household before it disappeared and there was no way to interact with it.
Damn it. 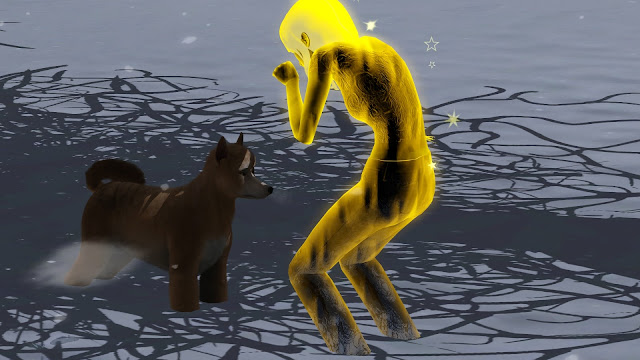 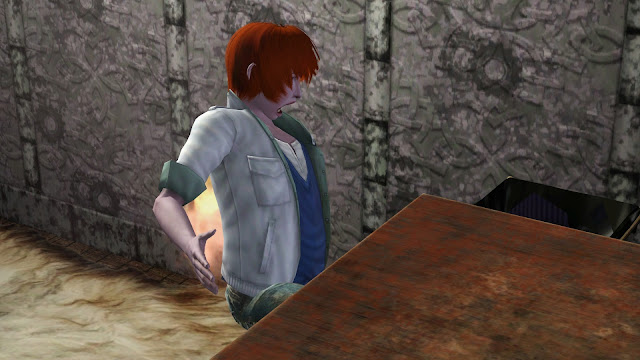 "HOLY SHIT, HOLY SHIT. MY PANTS! MOM IS GOING TO KILL ME!" 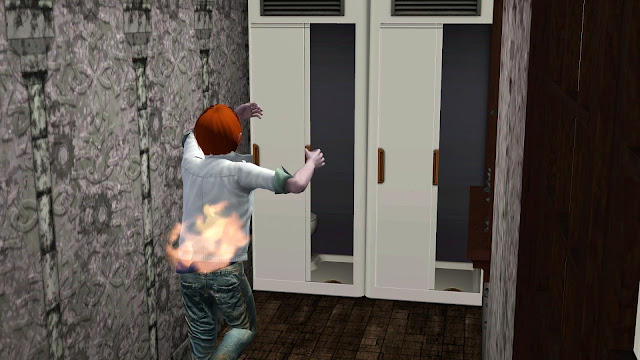 Paris-
"-don't say it writer."
Alright.
Here's Paris, nothing unusually about him and definitely not looking traumatized, listening to a tabcast before going back to the workbench (or is it an inventing table? I always get those two confused).
"WRITER NO."
Yes. Go back. 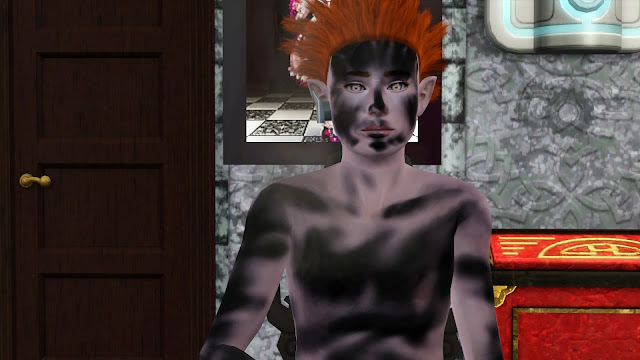 While Paris was headed back to the workbench, I checked up on Ersa.
"IT'S A TURTLE. WRITER ITS A TURTLE!"
You know what that means? 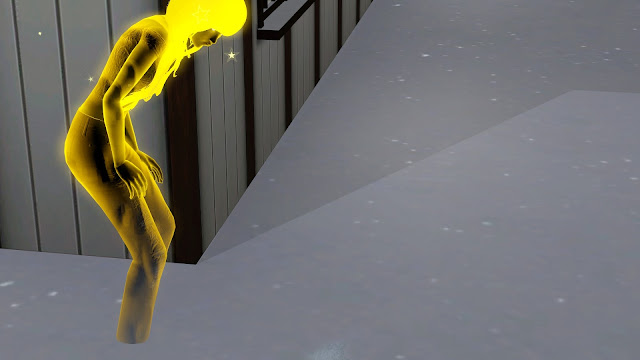 That's right guys.
I named him Voldetort. So I didn't finish the Harry Potter books but...hey! A for effort! 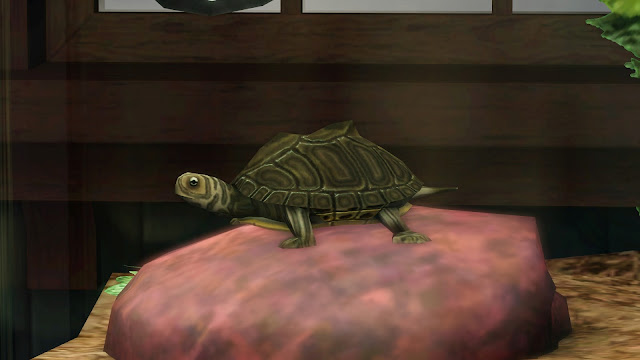 Sena isn't dealing with the lost of Jebidiah well so I gave her a chainsaw. 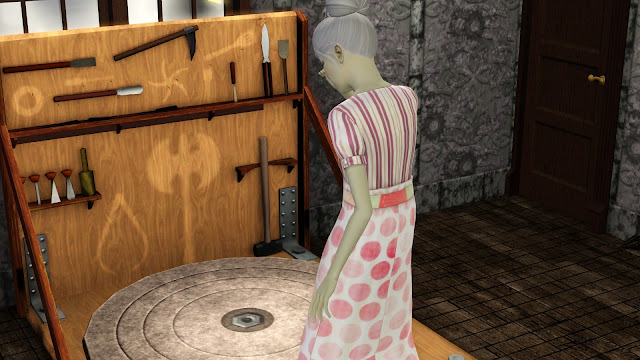 "So I heard you burned those new pants I bought you..."
"Nah mom. The writer said they were fireproof. Right, writer?"
Uh..right!
"Alright then, Paris. Remember, if you catch on fire again, do NOT stand there screaming about it. Just stop, drop, and roll."
"Okay, mom. Okay." While waiting for work to roll around, Dia was chained to, you guessed it, the easel!
She made this painting and I love it.
"I love it too." 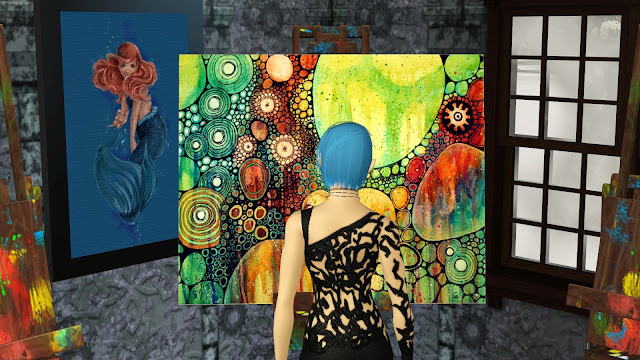 Time for work! Here's Dia in her uniform.
"I don't know if I like this color on me."
Yellow? Honey you are yellow. 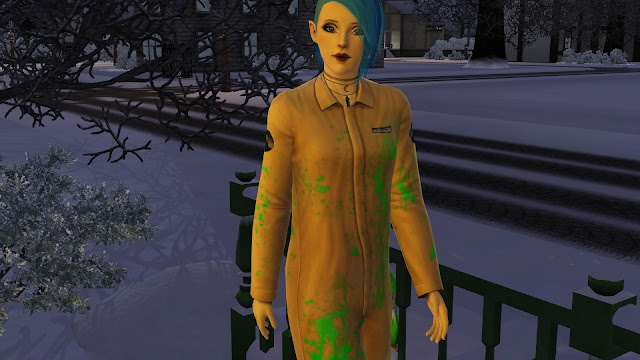 Some ghost was haunting a counter so Dia had to go and kick them out.
Of all the things to haunt. *Shakes head* 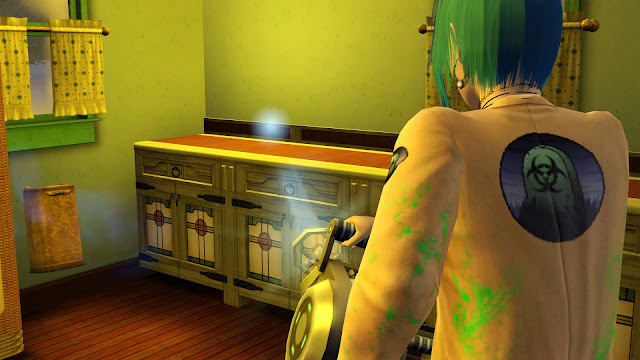 "MAN I SURE HATE HAVING A HAUNTED MAILBOX! I was gonna get the girls together to have a baking party and oh my, the ghosts started acting up again!"
"Yeah, yeah lady." 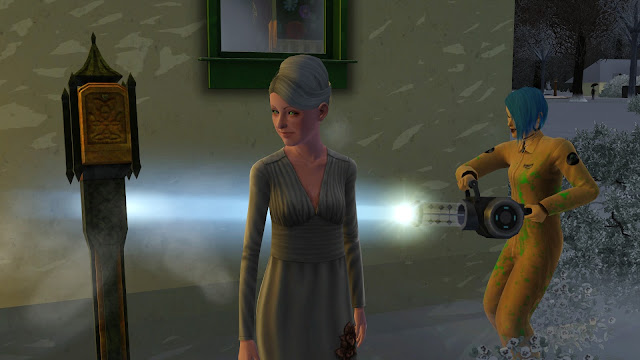 Another ghost decided to haunt a lamp.
A lamp.
Why not a laptop...or a refrigerator..or a TV? 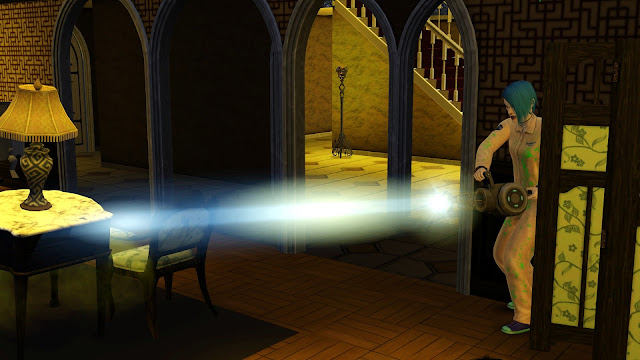 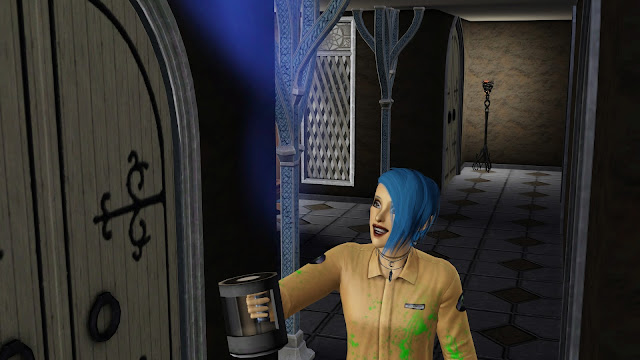 Level five! Hell yes! I think she'll have kids when she ages up to an adult so she can focus her whole young adult life on working on her profession. That way, she might have a decent shot at completing it. 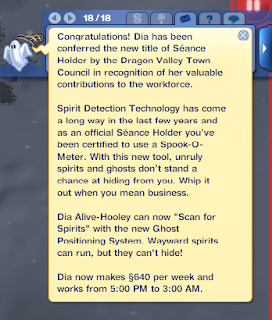 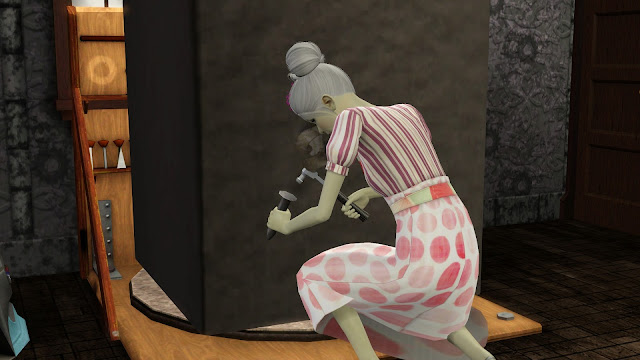 It's winter time so Ersa doesn't have to do much and decided to be all adorable and build a snowman. 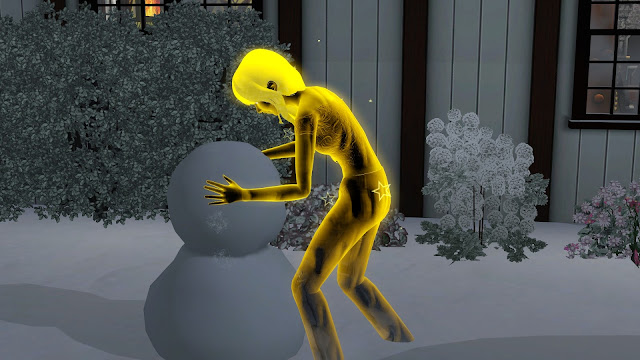 "Do you think he's not round enough, writer?"
He's perfect. 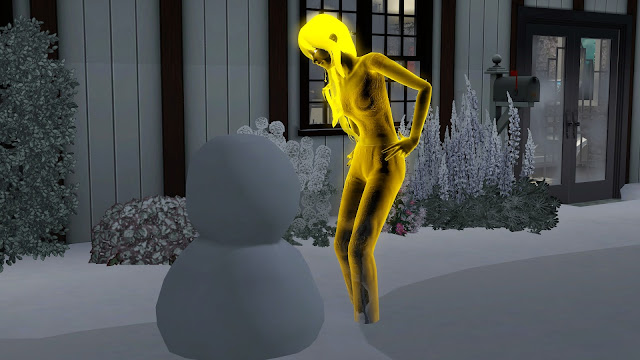 After Ersa was done creating her snowman, I shit you not, Dia walked over her to talk about the local hauntings.
"There's Larry, you know. Died from trying to fix a TV too many times and is haunting his old house." 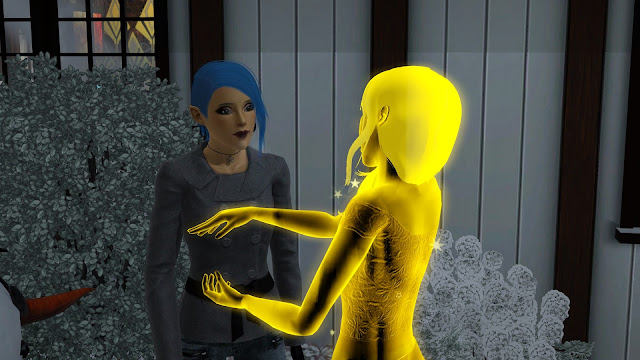 "Wait, did Larry possess a counter by chance?"
"Probably. Larry does a lot of weird things." 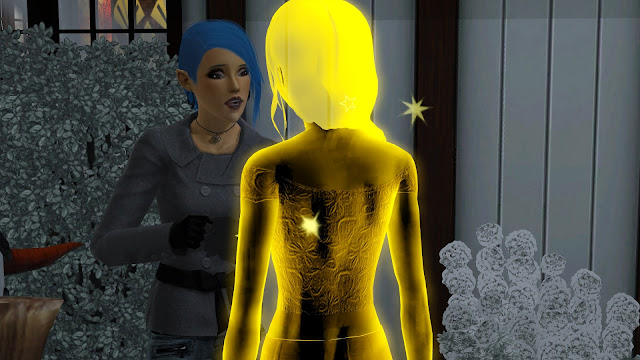 Nuala decided to autonomously dip kiss Koios and in each update, I feel better about them being together. 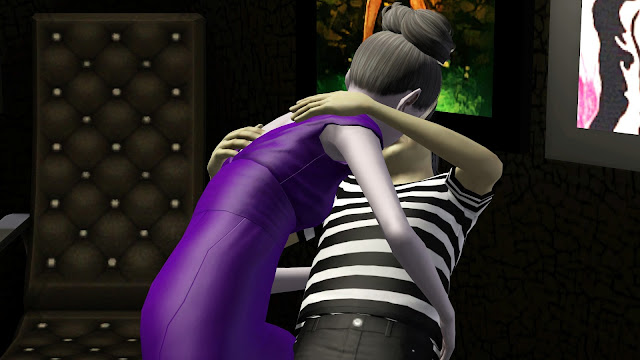 "Look writer! I made a dancing crocodile! The sea cumbers will love this!"
Looks awesome, Sena! 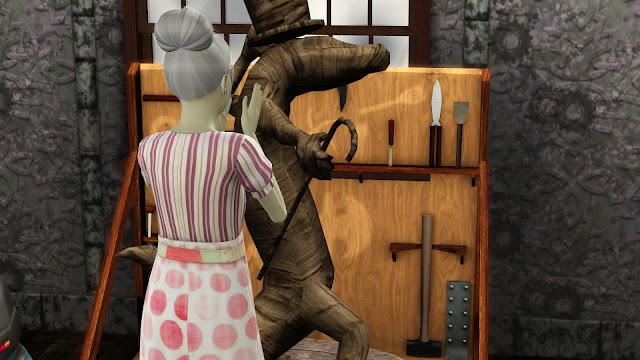 Now time for an ice sculpture-WAIT NO.
NO.
NO.
NOOOOOO. 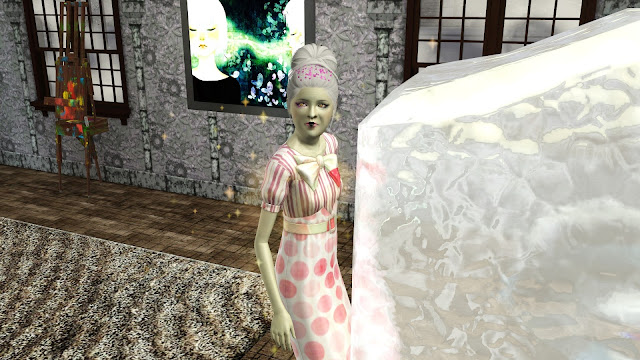 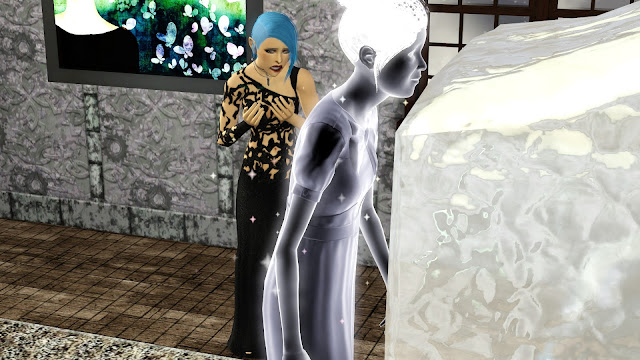 "Ha! Said I would be back!" *Stares directly at camera* "So you might be wondering why I'm here..."
NO ONE CARES.
"Mr.Reaper, I'm not ready to leave yet. I want to see my grand babies!"
"Sorry Sena, can't happen. Jebidiah is waiting for you."
Ah shit my heart. 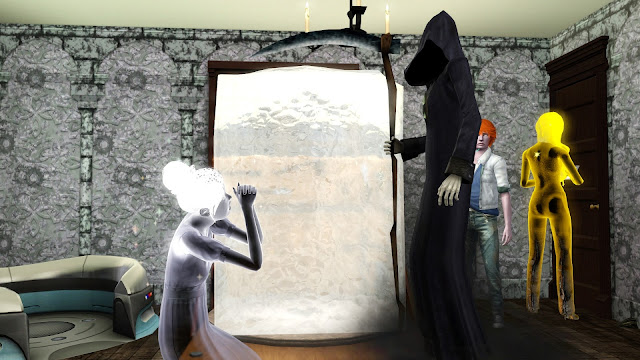 R.I.P Sena. Thank you for all your madness. 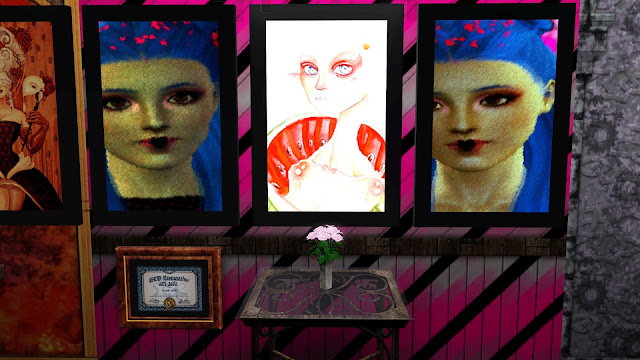 Also the large tombstone is a nice gift too. 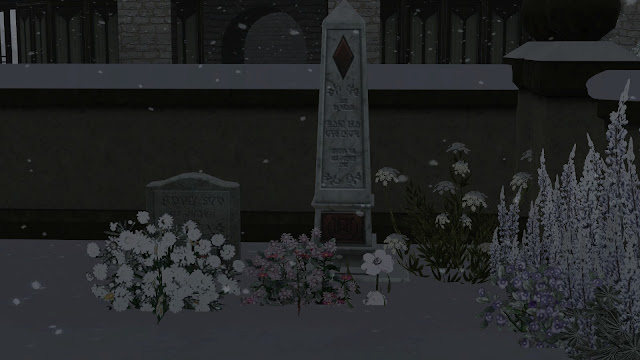